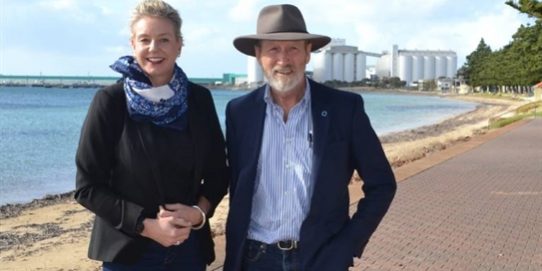 PORT LINCOLN TIMES
By Lauren Dinning
IMAGE: Federal agriculture minister and deputy Nationals leader Bridget McKenzie with member for Grey Rowan Ramsey in Port Lincoln on Wednesday.
FEDERAL agriculture minister Bridget McKenzie visited Port Lincoln on Wednesday to meet with primary producers and she says she wants Australians to know more about the domestic seafood market.
Ms McKenzie said she wanted to meet with peak bodies and local industry to “truth test” her priorities as agriculture minister “on the ground”.
She said visiting Pristine Oysters, which export 85 per cent of produce overseas, had helped her understand the importance of ensuring there was both local and global markets for seafood well into the future.
“The peak industry here is in the fisheries…we've got to get the message out about how sustainably managed it is and take pride in that,” she said.
“It's very delicious, very fresh, and there's a great system in place where oysters harvested this morning are in Hong Kong by tomorrow afternoon.
“It's an absolute priority to have fresh local seafood, it's a great kept secret….we need to get the message out.”
She said issues raised during her trip to Port Lincoln included a skilled workforce shortage.
“There is such a drive locally to solve the problem within local businesses,” she said.
“I hope by the time I leave I know what matters to South Australia.”
She said it was also important to ensure South Australian seafood was known domestically as well as internationally, and to protect the biosecurity of produce.
Ms McKenzie said her top priorities other than election commitments were biosecurity breaches and penalties, legislation around animal activists, dealing with the workforce shortage, and improving market access and export potential for primary producers including SA's seafood industry.
She said she wanted the $60 billion agriculture industry to be worth $100 billion by 2030.