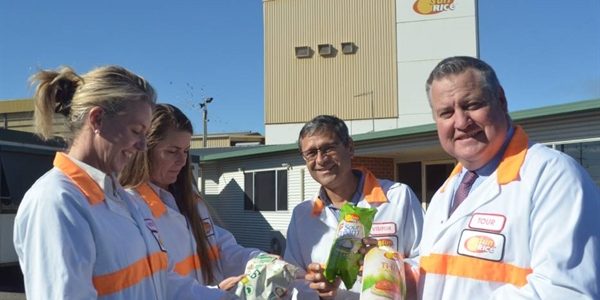 AND on the eighth day as Australia's agriculture minister – Senator Bridget McKenzie visited the MIA to speak to growers and SunRice.

Ms McKenzie visited mango and dairy farmers and before leaving for Port Lincoln to speak to tuna farmers, spent time with cotton industry representatives.
“It's important for me to get on the ground and hear directly from producers about the challenges and the opportunities,” she said.
She said people in the cities believed the rice industry was using too much water to produce crops.
“We grow the most high quality rice here in the world with the smallest amount of water,” Ms McKenzie said.
“That is a great story that we need to get out into urban Australia, so that they can understand that this is a sustainable industry.” She praised the efforts of SunRice in adding value to rice crops.
“This is an incredibly sustainable, flexible and adaptive industry, exactly the kind of thing we want to see for Australian agriculture going forward,” Ms McKenzie said.
“And seeing the processing facilities here means they're value adding right here in regional NSW, they're not shipping that commodity off to Sydney or Melbourne to be further processed or indeed another market overseas.”
Ms McKenzie acknowledged the drought was having an impact in the MIA.
“Water is in short supply for everyone,” she said.
“The great thing about a rice crop however, is unless you have the water, you don't put it in. Which is great because it's means it's a sustainable crop going forward “It is a tragedy for those people who have lost their jobs and I want to see more people fully employed in agriculture and agri-business right across regional Australia.”
Ricegrowers Association Australia president Jeremy Morton emphasied the industry's bright future.
“What we really need is some rain, so we can grow some great product and get it exported around the world,” Mr Morton said.
Mr Morton said the Murray Darling Basin Plan had to be fully implemented with no further negative impacts on communities.
He wasn't worried about farmers switching to other crops during times of low allocations and said every crop “had its day in the sun” as part of crop rotation systems.
“Through the Basin Plan, we've got a property right to water and we're seeing water go to the highest-value use, the trouble with that is it's all flowing to permanent horticulture,” Mr Morton said.
“In a variable system, you cannot have all your water going to permanent horticulture, at some point you'll have a water shortage and you'll have a disaster.”
Getting water use settings right is something Mr Morton is keen to work with the government on achieving.