THE AUSTRALIAN: We must put our interests first on carbon 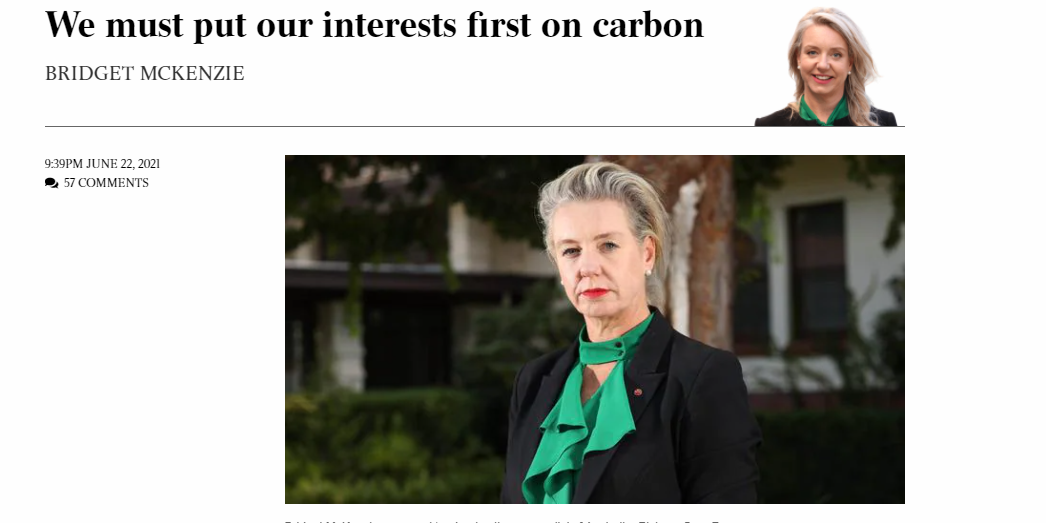 It is one thing for politicians to promise on the international stage a net zero world in the distant future when none will be around to be accountable. It is quite another thing to be able to deliver on that promise.

Such is the case with the recent G7 summit as member nations — Canada, France, Germany, Italy, Japan, the UK and US — stated their intent to accelerate plans to achieve net zero carbon dioxide emissions by no later than 2050 and cease government support for unabated coal power generation.

Unfortunately, that pledge blithely ignores the reality that some of the world’s biggest carbon emitters — such as China — currently have a green light to increase their emissions for many years, or that other countries are setting more ambitious targets, while failing to meet ones previously promised. Others participate in carbon abatement schemes that are at best dodgy, and at worst downright fraudulent.

Australia is different. Internationally, Australia has a reputation for being a nation of our word. We play by the rules. We are in fact meeting and exceeding our international obligations, reducing emissions by more than 20 per cent based on 2005 levels, delivering on what we promise, and faster than similar nations such as New Zealand or Canada.

Last week we celebrated the signing of the UK-Australia Free Trade Agreement.

But it wasn’t always so. After World War II the world opened to a liberal free-trade agenda that favoured large industrialised nations that was not initially to Australia’s advantage, and that was far from fair for Australia or for more undeveloped economies.

My party, the Country Party, because of leaders like former Trade Minister John McEwen, made sure that Australia’s best interests were secured at international forums ensuring trade relations had to be mutually beneficial. McEwen galvanised a Liberal prime minister to stand up to Britain in the early 1960s as it sought to turn its back on Australia and join Europe. Fast forward to today and we must be wary of platitudinous calls to set emissions targets which cannot be met without destroying hundreds of thousands of jobs in our agriculture, mining and manufacturing sectors. Or those that seek to coerce us into setting targets by imposing “carbon tariffs” – a non-tariff barrier by another name – on our vitally important exports as some European nations want to, which my party will vehemently oppose.

On the other hand, if the world is in fact moving toward a net zero future, Australia needs to ensure the rules and the methodologies that underpin it are fair, enforceable, agreed to by everyone and importantly in our national interest.

We must be clear ourselves as to what those objectives are before entering such negotiations. The post-WWII free-trade regime took an enormous amount of hard negotiations and work. Any genuine, transparent and rules-based system to reduce emissions will require the same. We must deploy all our diplomatic and trade resources to ensure Australia’s interests are looked after. That we don’t blindly accept methodologies or rules developed far away that do not account for the positive contribution our resource sector makes to reducing global emissions and assisting economic development.

Failing to do so risks sleepwalking Australia into an international agreement that favours rich industrialised nations that already have the competitive advantage of established low-emission technologies such as nuclear energy or are endowed with large sources of hydroelectricity or both. Or who are able to draw on neighbours to prop up their power supply as nations like Germany does, while they shut down well-functioning nuclear and coal plants.

These are luxuries Australia cannot enjoy. Especially when we prohibit ourselves from the nuclear low-emissions path, not helped by the blind opposition to it from some quarters. In the end, I’ve always been confident that technology will be the solution to reducing emissions without costing jobs and as each year passes my confidence grows rather than diminishes.

Nevertheless, coal and natural gas will continue to remain essential for decades to Australia’s energy needs and economy even as we embrace other technologies.

Coal, in particular, has provided decades of cheap and reliable energy for our industries and households; it remains one of our biggest exports and underpins the prosperity for so many in our regional and rural communities, and more broadly this nation.

Energy exports like coal also underpin the prosperity of our neighbours in Asia. For example, demand for thermal coal – especially Australian coal – has grown dramatically over the past 20 years thanks to the rapid industrialisation and electrification of nations like China, India, Indonesia and Vietnam.

Annually electricity demand in Southeast Asia has grown by more than 6 per cent, while China adds 30GW of new coal capacity or three per cent of its current electricity generation capacity.

This is expected to continue as these countries seek to meet their energy needs and lift their people out of poverty into modernity. It would be absurd to turn our backs on the needs of our neighbours who want our highly calorific coal.

To do so will only see Australian coal substituted by dirtier lower quality alternatives from our competitors, thus increasing global emissions, while leaving ourselves considerably poorer.

So what must Australia do? Yes, we must meet our international obligations, as we have always done, but we must do so without blindly following international pressures driven by other countries’ domestic politics and advantage.

Putting our national interest first was in the forefront of our thinking during the international developments of the 1960s, and we must do the same today.

Bridget McKenzie is the leader of the Nationals in the Senate