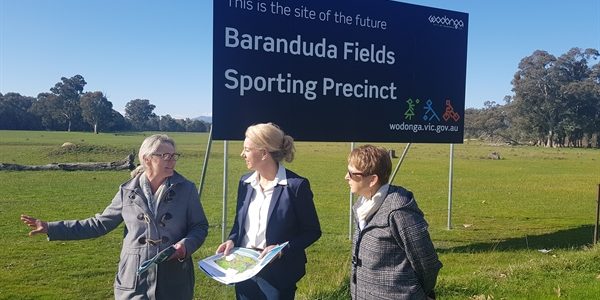 Pic: Senator McKenzie with Leona Edwards (left) and Debra Mudra (right) from the City of Wodonga

Baranduda Fields Sporting Precinct is a major step closer to becoming reality with a $10 million Government investment locked in.

Wodonga-based Nationals Senator for Victoria and Deputy Leader of The Nationals, Bridget McKenzie, was delighted to confirm the funding which she announced as Sports Minister in April as part of the Liberal and Nationals Government’s 2019 Election commitment.

“The Baranduda Fields Sporting Precinct is an important, long-term project of the Wodonga community and I am proud The Nationals in Government is delivering for the people of Indi and North East Victoria,” Senator McKenzie said.

“The Nationals understand the importance of investing in regional centres and game-changing infrastructure such as the Baranduda Fields development will cement Wodonga as a top 10 regional capital.

“Along with our commitment to the historic cross-border Regional Deal, this project is part of our Government’s commitment to ensure regional Australia grows and develops.

“This project will mean Albury Wodonga will have the best sporting facilities between Melbourne and Sydney.”

Deputy Prime Minister and Minister for Infrastructure, Transport and Regional Development Michael McCormack approved funding of up to $10 million for Wodonga City Council under the Government’s Community Development Grants Program.

The Department of Infrastructure, Transport, Cities and Regional Development will work with Wodonga City Council to finalise the funding agreement.

“Wodonga and the wider region will enjoy 21st century facilities, fit for purpose facilities, to stay healthy and active, and to deliver pathways for our young athletes.

“This project also recognises the fact that competitive sport is not for everyone so it will also include a raft of informal opportunities to keep active through bike trails, walking tracks and the like.”