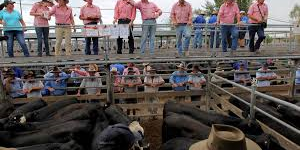 THE owners of Barnawartha’s NVLX saleyards knew weeks in advance that at least one processor would boycott its first sale in February, they told an inquiry sitting in Canberra this week.

The admission was made by Regional Infrastructure managing director Gary Edwards during a Senate Inquiry into the effect of consolidation in the red meat processing industry.

“We received formal notice from one company some months out, which was Teys,” Mr Edwards said.

“There was some verbal communication in the few days leading up to the sale with others.

“… I was definitely surprised at the quantity that were not participating in that market on that day given that they had participated the previous week.

“I was aware by the time the day arrived, but it was too late to effect change, that there could have been three of four additional people not in attendance for a range of reasons.”

Nine regular buyers did not attend the sale.

Meat processors wanted the yards to operate under a post sale weighing system. It was using a pre-sale system.

The admission and failure to pass on the information to producers riled National Senator Bridget McKenzie.

“I was most surprised that North East Livestock Exchange knew about it and didn't let their producers know because there would have been a lot of farmers who trucked in stock expecting it to be a competitive environment and it’s not … I've asked Mr Edwards to go back to his office and work out what the dollar loss by our local producers was on that day.”

It was greeted with scepticism from the committee.

“I've worked very, very closely with the VFF and NSW Farmers on this issue and they're very, very clear on where they stand on post-sale weighing and it's not that it's in the producers’ best interest,” Senator McKenzie said.

“So I'm looking forward to getting hard evidence from the processors' peak body on how they've come to that opinion.”

The senator said the ACCC was looking at the issue and believed legal action against buyers who boycotted the sale was a real possibility.

“Everyone knows it's happening, anyone that's hung around saleyards knows,” she said.

“I've been at National Party branch meetings for 20 years and my beef producers say what goes on.

“I think what we have to do is make sure that it's as transparent as possible.

“That's our best way of uncovering collusion and increasing competition and at the end of the day that's what we want.”