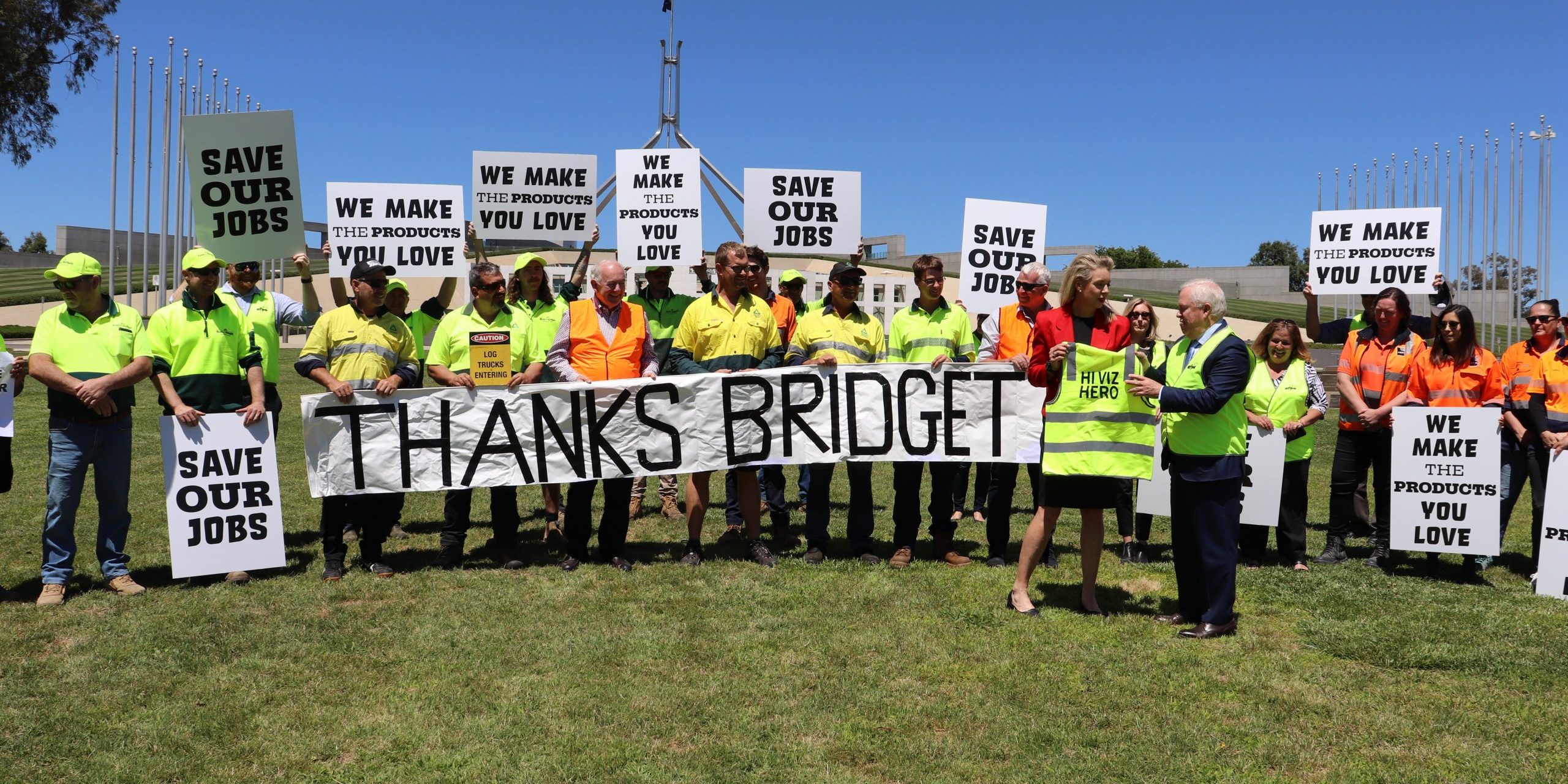 Senator McKENZIE (Victoria—Leader of the Nationals in the Senate) (13:47): Today, the drums of democracy are beating loudly for our native forest industry as this week a full bench of the Federal Court upheld the appeal of VicForests against the action by Friends of Leadbeater’s Possum following the years of uncertainty Justice Mortimer’s finding created for the industry. But, although the drums are beating, they’re yet to find a rhythm. We need to use the democratic processes available to us in chambers just like this, through the Senate, to give certainty to our native forest industry and to help them find that rhythm. That’s exactly what a private senator’s bill before the Senate at the moment seeks to achieve: certainty for the native forest industry to help them get back into business, to stay in business whilst upholding stringent environmental standards, which renewable timber industry harvesting provides in this country. We need to be very proud of this industry. We lead the world in timber harvesting that is subject to the most stringent environmental standards so we can all have confidence that we get the balance right, the triple bottom line that we’ve been seeking to achieve for so long.

To balance the socio-economic outcomes from native forestry has always been the intent of the interaction between regional forest agreements and the federal EPBC Act. And that is what the Federal Court ruling this week vindicated—that forestry operations that are subject to a regional forestry agreement, which is an agreement with state governments, are outside the remit of the EPBC Act, not because they’re not subject to stringent environmental regulation but because they are subject to strict environmental regulation that is written into the regional forestry agreement. It is the state governments’ job to manage and ensure that that occurs, so that they are working cohesively in line with the EPBC Act. This is a framework that many, many timber regions in this country have operated under for over two decades.

This framework upholds the Commonwealth’s strong environmental expectation and delivers for the environment, whilst allowing for the sustainable harvesting of timber and creating thousands of jobs. But while green law-fare has been able to be played out, forestry operations have ground to a halt. We have seen that from militant environmental organisations making false claims and seeking to use the court system to stop the lawful operation of businesses in the timber harvesting industry, so putting regional jobs, regional economies, at risk for the sake of their ideology. It doesn’t just mean that we can’t get the timber that we need. It means there are no sustainable jobs, and these jobs are the ultimate in sustainability. There’s no sustainability for the regional communities those jobs support, and those jobs are not just made up of forest harvest workers. There are haulage drivers, timber mill workers and high-tech advanced manufacturing jobs in the timber industry. The industry is world-class, something that we should be celebrating, and I’m looking forward to heading down to visit ASH, in Heyfield in southern Victoria, next week.

The cost is the livelihoods of hardworking people and their families, the demise of regional towns and the loss of investment confidence in the industry that produces the ultimate renewable product, timber. I know those environmental extremists don’t want to hear this, but for every single tree harvested in this country, one is planted. Yes, they take a long time to grow, but look at the products that you get, look at the timber in this place that we work in. It is beautiful Australian hardwood. The implications of the ambiguity that Justice Mortimer’s decision created are far-reaching. Bunnings stopped selling timber logged by VicForests, claiming that the timber was illegally logged. The unanimous decision by the Federal Court this week makes that an absolute furphy. Imagine if Bunnings were forced to close their warehouse on the back of a judge misinterpreting the intent of some bizarre consumer law that slammed their doors shut without a whimper. The outcry would be huge: no more Sunday snags for fundraising barbecues, no more support for local communities. This is parallel to the damage caused by the extremists who seek to undermine our forestry industry. We’re talking about tens of thousands of jobs being in jeopardy, people having to find work in industries other than forestry and skilled workers being lost.

What the amendment to the EPBC Act that’s before the Senate seeks to do is to make certain that the relationship between the EPBC Act and the regional forestry agreements that has operated without a whimper for two decades remains, is not put in jeopardy by the decision of Justice Mortimer, who, I might say, is a good friend of Bob Brown, no friend of the forestry industry, as my Tasmanian colleagues would understand. The delivery of certainty of resources, access and supply for industry, ecologically sustainable forest management are the things that are covered by the RFAs along with an expanded and permanent forest conservation estate that provides protection for Australia’s unique forest biodiversity. Those things are actually written in to the regional forestry agreements. But if you listened to these environmental extremists, you would think that the forestry industry’s only intent was to chop down every single tree in this country and never plant another one. That is simply not true. The Department of Agriculture’s own document states, ‘RFAs implement the Australian and state governments’ commitment to ecologically sustainable forest management.’ Fact. We need to stand up for this important industry and to be able to say, hand on heart: ‘Yes, you have a future protected from the waging of green law-fare against you. You have job security. Invest in the forest industry. Invest in your regional community. Invest in regional advanced manufacturing.’

According to the ABC, Australia is in the midst of a timber shortage. The timber industry is even calling for an extension to the government’s HomeBuilder scheme because one of the primary barriers is access to timber to actually build houses to meet the demand. I was in Echuca on Friday. They want to expand. Everyone is rushing to the regions. We think it’s fantastic. We can’t wait to welcome you all out to where we love to live and where you can raise a family and have a great career, but we want you to have a house. We can’t build those houses unless we have access to timber. How can anyone in this place think it’s okay to shut down our forest industries? It would mean we would have to import timber; the blood of orangutans would be on our hands. It is very well and good for people to come into this place and take the high moral ground, but it is not fact based. When we import timber, we cannot be assured of its sustainability and its environmental credentials, as we can with timber that is harvested within our own community.

I was really chuffed by an article about timber in The Economist, which stated: ‘There’s no other building material that has environmental credentials as exciting and as overlooked as wood. The energy required to produce a laminated wooden beam is one-sixth of that required for a steel one of comparable strength.’ Well, hello! Someone needs to tell the Greens. We’ve got a renewable resource; we can replant it. It takes less energy to produce and that means less coal burned and fewer emissions, yet we are cutting off our nose to spite our face once again. The article says: ‘It’s a great insulator. Wooden building contribute to negative emissions.’ Someone had better tell the Greens party. Further, ‘A softwood timber frame provides nearly 400 times as much insulation as a plain steel one of the same thickness and over 1,000 times as much as one of aluminium equivalent.’

Look around you in this place and everywhere we work in this building. The timber used for the floorboards, the doors in our offices and our desks is not plantation softwood timber. It is beautiful Australian native hardwood. It’s tough, it’s sustainable, it’s renewable and it’s beautiful. We need to be proud of this product and use it more rather than try to shut the industry down and use some European-introduced softwood pine as a substitute for our beautiful mountain ash, red gums et cetera.

It’s not just the National Party that’s on the bandwagon. No. My good friend Michael O’Connor from the CFMMEU is right behind my private senator’s bill. As the Labor Party senators make their way into the chamber, I would really encourage them to support the blue singlet workers, like my father—not white collar—in the Australian timber industry—

Senator McKENZIE: I can only speak for my father, Senator Wong—to actually support the real workers in regional Australia, our forest industry.