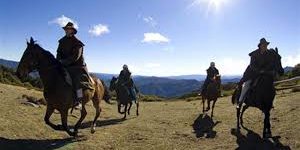 THE Mountain Cattlemen Association (MCAV) of Victoria and supporters were very disappointed to learn via a radio interview today the cattle grazing trial in Wonnangatta Valley has been scrapped.

The way it was announced by the newly appointed Environment Minister Lisa Neville was disrespectful, the MCAV said.

MCAV president Charlie Lovick said the organisation wrote to the Ms Neville on the day she was appointed, asking her to not make a hasty decision because the trials were carefully controlled and vastly different from normal rangeland grazing.

“To learn of her decision on radio was very disrespectful,” Mr Lovick said.

He said the minister’s hasty decision overlooked the benefits of the trial including scientific observation of the Pale Golden Moth orchid, opening up hiking and riding tracks, two planned burns and improvements to two very rough four wheel drive tracks.

“In just one year the valley is short, green and looks magnificent. With the trials not going ahead in a very short time it will revert to its previous condition as a weed and feral (animal) infested jungle and fire trap,” he said.

“The issue of alpine grazing is totally political and any rational discussion about grazing assisting with good land management has gone out the window.

He criticised the Victorian National Parks Association’s (VNPA) claims about the Wonnangatta Valley Trial as being prejudice and “skewed by philosophy” against grazing.

The MCAV, the Gunaikurnai Aboriginal Corporation and the State Government previously signed an agreement to work on joint management plans for Wonnangatta, he said.

“Included in the concept was to be the involvement of the young people from both groups. It is difficult to see how that can now proceed.

“This is a huge opportunity lost for two experienced groups with intergenerational knowledge working together for the betterment of the land.”

Nationals Senator Bridget McKenzie has leapt to the defence of the trial, calling on the new Victorian Government to allow the completion of a cattle alpine grazing trial and await the results, rather than rushing to shut it down for political reasons.

She said the trial was limited to 262-hectares on the former Wonnangatta Cattle Station and was subject strict conditions following a strenuous approval process and public consultation.

Category: In The NewsWednesday, 10 December 2014