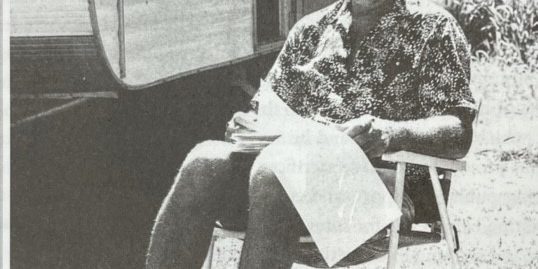 CAPTION: Doug Anthony running the country from his caravan during the Christmas break – pic source ‘Ninety Not Out’ by Paul Davey

It would be around this time of the year during the 1970s to early 80s when National Party leader Doug Anthony would run the country as acting Prime Minister from a caravan on the NSW north coast during the family’s annual beach holiday.

What would be for us an ordinary summer spent camping on the beach, the daily routine of this extraordinary yet unassuming leader – dressed in casual attire of shirt, shorts and thongs – involved a walk to the local general store where he’d use the public telephone to talk to Canberra. That was before a cable was eventually installed, allowing the use of a then more sophisticated system of a telex machine.

He’d recall handling some big issues from the caravan in that time and today we salute an enduring legacy from another of the party’s giants with Doug sadly passing away just days ago.

As would be expected, words have flowed in tribute to this former great leader and his significant contribution nationally, internationally and importantly in our regions.

To think our country was close to losing him a first time, not through ill health but boredom. It was the perceptiveness by party leader at the time, John McEwen, who moved the promising young backbencher to the ministry in 1964, averting what would have been a great loss on so many levels. Anthony later admitted that prior to the start of his ministerial career, he was looking for opportunities beyond politics at the time.

We can be thankful for McEwen’s mentorship of Doug Anthony who went on to become the Minister for Interior, the party’s deputy leader, followed by Minister for Primary Industries then Trade, during which he drove significant reform and opened up of trade opportunities for agriculture and mining.

Just as our current government under the Morrison-McCormack leadership sets out to expand trade markets amid growing China tensions, it was under Doug Anthony’s trade ministership and that of his predecessor John McEwen that laid the foundations to help make this happen.

Becoming the party’s youngest leader after the retirement of John McEwen, Doug Anthony relentlessly advocated for our regions during his 13 years as Deputy Prime Minister and local member. Following in the footsteps of his father Hubert Lawrence, as Doug’s own son Larry did, in continuing the Anthony 55-year hold of the seat of northern NSW seat of Richmond.

Representation spanning over more than half of the Nationals 100-year existence backing ordinary Australians to be their best and fighting for a sovereign, prosperous and safe Australia.

We mourn the loss but have gained and learnt so much. Doug, and his family, would want us to focus on that.

Leader of the Nationals in the Senate

Opinion Editorial – We must put our interests first on carbon (As seen in The Australian)
Tuesday, 22 June 2021
Latest News
Bridget on Facebook