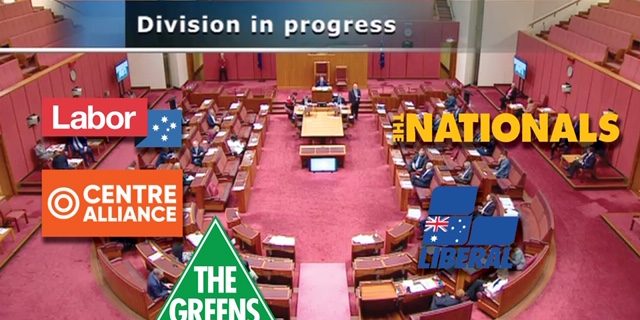 Labor has aligned itself with the extreme left and completely abandoned the very people they were established to represent. The Labor Party could not fill a Speaker’s List and Queensland Labor were cowardly missing from action from the Chamber when push came to shove, letting the socialist left dictate their agenda.

Nationals Senate Leader Bridget McKenzie said this was a scandalous move in the Senate by Labor and their coalition partners, the Greens.

“Who is actually running the party of the workers?” Senator McKenzie said.

“Not even the powerful CFMEU wants to be associated with this extreme left-leaning, job destroying Labor party.

“The Nationals want to create jobs and opportunities for rural and regional Australians, we want a stronger economy supported by affordable, reliable power.”

“The green left remain in control of the once proud Labor party and no matter how many times Joel Fitzgibbon dons a hi-vis shirt, Labor’s opposition to coal power shows that he is all shirt and no shovel.” Senator Canavan said.

NSW Senator Perin Davey bemoaned Labor turning its back on both its history and on the contemporary workers of today, especially those in the Hunter.

“It is like their connection to their roots died along with the famed tree of knowledge. Like that tree, which was maliciously poisoned, the Labor Party is now poisoned by Green’s ideology.

“I say to the people of the Hunter: The Nationals are the ones that support your job and the future of your job.” Senator Davey said.

Townsville-based Senator for Queensland, Susan McDonald, said this was more proof Labor was no longer the party blue-collar workers could trust.

“It is to Labor’s eternal shame that they would rather appease the Greens and climate change activists than the very people who put faith in them to ensure they have good-paying, long-term jobs in regional Queensland.

“It is incredulous they would oppose a project destined to deliver cheaper and cleaner power, 2000 jobs during construction and 600 operational jobs in regional Queensland.” Senator McDonald said.

NT Senator Sam McMahon said this is a commitment the National Party took to the last election and that it was evident Labor do not believe in honoring their commitments.

“Labor don’t support mining and they don’t support the regions who rely on it. Labor has just gone through a NT election claiming that they support the onshore oil and gas industry. Is that about to change? Are they about to follow their southern masters?”

The Nationals in Government have been clear – they are committed to support a feasibility study on the Collinsville project in Queensland. Labor, on the other hand, voted against reliable, affordable power generation.