McEwen’s legacy deserves to be celebrated for all country people 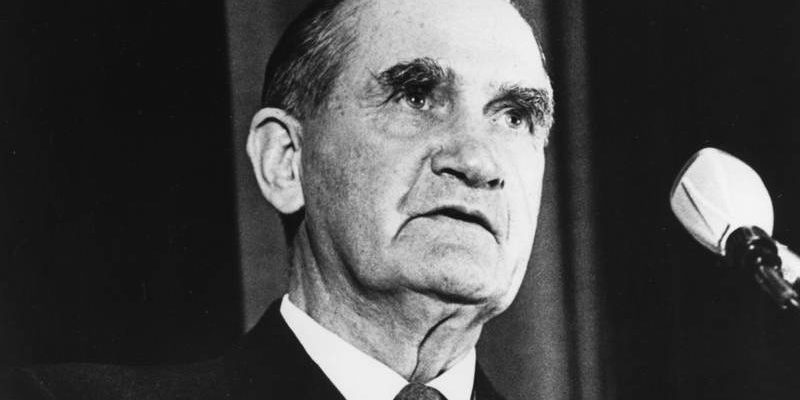 Here’s my piece which appeared in the Canberra Times

McEwen’s legacy deserves to be celebrated for all country people

THERE was an attempt to cancel Black Jack this week. But don’t worry James Packer, your casinos are safe for now. I’m talking about Sir John “Black Jack” McEwen, Australia’s 18th prime minister.

This is the centenary year for the Nationals and, to celebrate, a bronze statue of McEwen is slated to be situated appropriately near Old Parliament House in Canberra later this year. This distinctive honour rightfully recognises the man who led the Country Party from 1958 to 1971, and was sworn in as prime minister following the death of Harold Holt.

However, the decision has come under fire by Dr David Headon, a cultural consultant from the ANU who has previously been a cultural adviser to the National Capital Authority.

“Like many Canberrans,” Dr Headon told The Canberra Times last week, “I would be very interested in the intellectual, political, cultural and social justification for McEwen being placed there.”

I do not want to make this an ad hominem attack – but Dr Headon has embarrassed himself. That Black Jack was a political titan is not in dispute. Former Liberal leader John Howard recalls: “McEwen is the most significant person in the Menzies era other than Menzies himself.” Labor prime minister Paul Keating went further: “Sir John McEwen ranks as the most significant post-war conservative.” Last time I checked, Australia was still a pluralist democracy – and Canberra of all cities should celebrate that.

A comprehensive list of McEwen’s achievements would be too long, but here are a few highlights. He was a poor boy from Chiltern in country Victoria; orphaned at seven, he had no formal education, but was elected as the MP for Echuca at the age of 34 in the middle of the Great Depression. He fought for the cause of his fellow soldier-settler farmers who had served in Gallipoli and on the Western Front and were struggling to survive due to the global collapse in commodity prices. During World War II, McEwen served as minister for external affairs and minister for air. He was handpicked by John Curtin to serve on the War Advisory Council, helping plan a desperate defence against the impending Japanese invasion. After the war, McEwen served in the Australian delegation to the first United Nations conference in San Francisco, alongside Labor’s Frank Forde and H. V. Evatt. He believed a large post-war immigration program was an essential pillar for Australia’s development and industrialisation. As Australia’s minister for trade, McEwen renegotiated the Ottawa Agreement with Britain and led the establishment of trading rights for middle powers at the GATT negotiations in Geneva.

He was Australia’s longest-serving trade minister, and arguably his greatest achievement was striking a trade deal with Japan in 1957 – just 12 years after the conclusion of World War II, while memories of the atrocities in prisoner of war camps were still fresh.

Labor opposed the deal and according to Malcolm Fraser, then a young MP, McEwen was friendless in cabinet. Menzies, though he allowed the negotiations to proceed on McEwen’s insistence, forbade it being done in the name of the government. “So the risk was McEwen’s,” said Fraser. “That was the measure of the greatness of the man.”

Because of McEwen’s courage, Japan became our largest trade partner and a close ally, leading to prosperity for both our nations, especially regional Australia. McEwen’s 21 days as prime minister of Australia are far from his greatest achievement.

Dr Headon should also remember that our national capital is for all Australians, not just Canberrans. Regional Australians should not be forgotten when we honour our nation’s political history. After 100 years serving the regions and our industries in our national parliament, it is very odd that this intellectual, cultural and social contribution is not already formally recognised. In Canberra, suburbs are often named after prime ministers and other important public figures. Even Labor opposition leaders Arthur Calwell and H. V. Evatt both have suburbs named after them. McEwen does not. Calwell and Evatt were both ardent defenders of the White Australia Policy, even as the Holt-McEwen Coalition government began to dismantle it.

In an era of damnatio memoriae (cancel culture), when statues are being torn down, it is about time that this one goes up. McEwen wasn’t perfect – he could be ruthless and domineering in pursuit of bettering the outcomes for country people. But this is a statue, not a canonisation. It would seem that certain out-of-touch elites at our universities need to get out more. I’d be happy to take a long drive and introduce them to regional Australia, our primary wealth-producing industries that underpin their comfortable perch and the resilient peoples who are very much the cultural heart of this country. Or maybe they just need to read a few more history books.