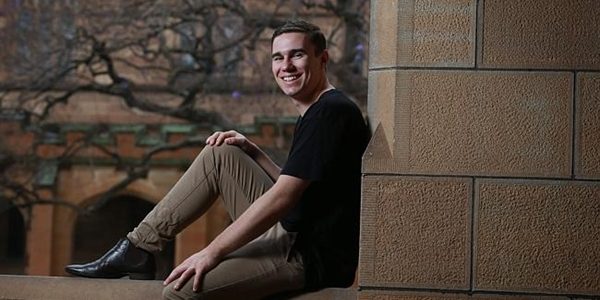 As a student from rural Australia with indigenous heritage, the odds are well and truly stacked against Samuel Brazel, at least according to reams of statistics produced by higher education analysts.

The latest Australian Centre for Educational Research figures, for instance, show that while 75 per cent of students from metropolitan areas who enrolled in 2005 had graduated by last year, only 69.8 per cent of regional and 59.5 per cent of rural students had done so.

Thanks to assistance from the University of Sydney, Mr Brazel is nearing the end of a bachelor of agricultural economics degree. But he says he nearly didn’t go.

“One of the main decisions I had to make was about the costs incurred. It would have been a lot cheaper and a lot more convenient to stay near Tamworth and go to university in Armidale or Newcastle,” Mr Brazel said.

He said there wasn’t just financial stress but emotional stress as well.

“The living cost in Sydney or Melbourne is a lot higher than in regional areas, and so when it’s incurred by the student you have to work many more hours while studying,” he said.

“If it’s incurred by the family, then it puts on an emotional stress and that continues to build, you know, because they are paying so much money for me to come to university when they may be doing it tough back home.”

It was this and the added worry of wondering whether they would be “eating two-minute noodles for the duration of the course” that caused many regional students to not enrol in the first place or drop out.

Last week Education Minister Simon Birmingham signalled his willingness to consider changes to access incentives for rural and regional students, as an internal Department of Education and Department of Social Services review considers ways to close the gap between regional and metropolitan student numbers.

At least 30 Coalition parliamentarians are backing a push for new measures to be implemented, with the interdepartmental inquiry to recommend a suite of policy measures as early as next month.

Yesterday Michael Spence, vice-chancellor of the University of Sydney, added his voice to support additional measures, telling the HES he welcomed fresh thinking about barriers to education for rural and regional students.

“I am personally very concerned about barriers other than fees, such as accommodation and other education costs,” he said.

“We believe this is a much greater concern than previously assumed and a key factor in ensuring access to tertiary education for students from all backgrounds.”

Opposition education spokesman Kim Carr said it was important to lift completion rates of all students, but particularly regional and rural students.

“The number of regional students who are dropping out of universities is at 26 per cent and 35 per cent for students from remote areas,” he said.

“(Dropping out) is quite common and the rate of dropouts has increased in recent years but is now averaging, for most regional universities, in excess of 20 per cent.

“We would provide support to lift regional university student numbers.

“Our funding guarantee is linked to lifting of standards and completion rates, while the level of support for students has been cut by this government.”

Incoming Greens higher education spokesman Robert Simms was also supportive, and said he would be interested in a discussion on ensuring regional and rural students were able to access quality university education.

“For those who would like to move to the city, we need to ensure that youth allowance and Austudy provide enough support for them to meet their basic needs without compromising their ability to meet study requirements,” he said.

Category: In The NewsWednesday, 14 October 2015