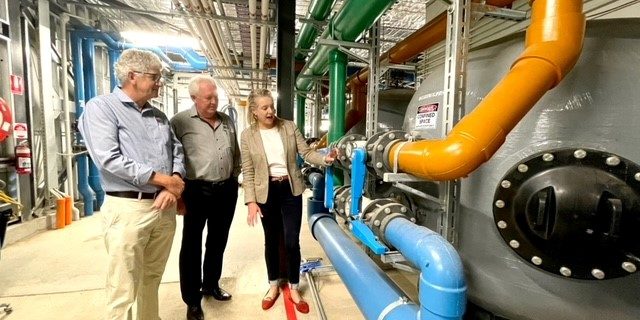 Elite athletes and competitive swimmers will benefit from the redeveloped Wangaratta Indoor Sport and Aquatic Centre, which opened today in the northern Victorian town.

Deputy Prime Minister and Minister for Infrastructure, Transport and Regional Development Michael McCormack said the new facility was a win for Wangaratta and the people of north-eastern Victoria.

“The Olympic and Yarrunga pools were ageing and structurally damaged, but this new, high-quality facility will provide for the community on a local and regional level for many years to come.

“We know our regional communities are reeling from the impacts of COVID-19, which is why the Australian Government’s ongoing $110 billion infrastructure pipeline is delivering local jobs and building economies right across the country at a time when it is needed most.”

Senator for Victoria Jane Hume said there was huge demand for swimming in Wangaratta.

“Swimming has the third-highest participation rate for recreation activities in Wangaratta, after walking and cycling,” Senator Hume said.

North-east based Nationals Senator for Victoria Bridget McKenzie said the pool meets demand for more fitness and rehabilitation programs including aquatic therapy for injured, post-operative, disabled and high-dependency users as well as aqua-fitness.

“The region’s population is ageing and people over 65 years of age, as a percentage of that population, are expected to rise from 16 per cent in 2014 to over 25 per cent by 2026. This is creating quite a demand for existing and new programs,” she said.

“It’s fantastic that the Wangaratta and surrounding communities, of all ages, abilities and needs, will benefit from these facilities.”

Wangaratta Mayor Dean Rees said the aquatic plan would be a transformational project for Wangaratta.

“We are creating the sporting and events capital for regional Victoria,” Cr Rees said.

“Major swimming events and elite athletes will be attracted to train at this brilliant facility. Our own community will now have a clear pathway to develop our young swimmers, while also catering for our ageing population.”

The project was jointly funded, with the Australian Government committing $4.4 million, the Victorian Government $1.5 million and the Wangaratta Rural City Council $11.02 million.