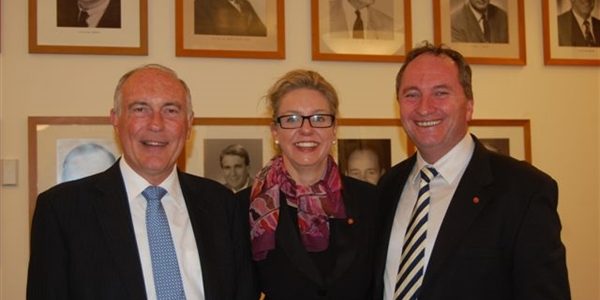 A lot of tributes have been given today to Warren Truss, retiring leader of the
National Party and without exception they are well deserved.
Warren took over the leadership at a time when many were predicting the demise of the
National Party. After eight years as leader, the numbers have almost doubled,
quite an achievement.
Warren has been a great leader, a leader of old school values, a leader not afraid of
a fight but he made sure it was always strategic on issues important to
Regional Australia and he invariably won.
He has been an example to us all, achieving so many things for regional areas
through hard work and integrity.
Invariably he stayed focussed on the greater task, a task that goes to the very heart of the man, a better and more equitable deal for Regional Australia.
That is what Warren Truss is all about, something that was highlighted in his
farewell speech in Parliament today.
I came from a small farming district and went to a very small state school and I now have the
privilege to become Deputy Prime Minister of our country.
I wonder whether I will be the last person with a limited education and who comes from one of the poorest electorates in the country to become Deputy Prime Minister? I hope not
because I think we do need amongst the leadership of our country a breadth of
experience and a breadth of skills.
I would echo Warren’s sentiments and point to his example of what can be achieved
by anyone given the chance to reach their full potential. That is why the
Nationals exist, geography should never be a deterrent.
He was the ultimate egalitarian, giving everyone a say and listening to other
points of view.
Despite the differences in politics, everyone paid tribute to Warren Truss today. They
recognised his contribution, his strength of leadership.
Thank you Warren Truss, through your distinguished service, you have helped make
Australia a better place to live.