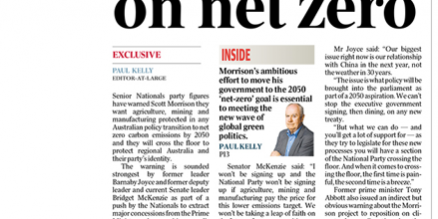 Senior Nationals party figures have warned Scott Morrison they want agriculture, mining and manufacturing protected in any Australian policy transition to net zero carbon emissions by 2050 and they will cross the floor to protect regional Australia and their party’s identity.

The warning is sounded strongest by former leader ­Barnaby Joyce and former deputy leader and current Senate leader Bridget McKenzie as part of a push by the Nationals to extract major concessions from the Prime Minister as he repositions on climate change.

At the same time Nationals deputy leader David Littleproud said: “Everything depends on how we get there and who pays for it. The Prime Minister had made it clear that before he commits he will be honest with the Australian people about it.”

The Nationals see Mr Morrison’s transition as a pivotal test of their standing with regional Australia and long-run credibility with its supporters. The real meaning of the comments from Nationals figures is their need to hold the Prime Minister to this week’s pledge he would not ask “regional Australians to carry that burden”.
Senator McKenzie said: “I won’t be signing up and the ­National Party won’t be signing up if agriculture, mining and manufacturing pay the price for this lower emissions target. We won’t be taking a leap of faith on the future of our communities.

“Senators and MPs across the National Party have been vocal that they will not support climate change policies that see rural and regional Australia pay the ultimate price. Nothing has changed. It always seems to be the case — and this is why the National Party still exists after 100 years — that structural adjustments across our nation are typically paid for by rural and regional industries and people.”

Mr Joyce said: “Our ­biggest issue right now is our ­relationship with China in the next year, not the weather in 30 years.

“The issue is what policy will be brought into the parliament as part of a 2050 aspiration. We can’t stop the executive government signing, then dining, on any new treaty.

“But what we can do — and you’ll get a lot of support for — as they try to legislate for these new processes you will have a section of the National Party crossing the floor. And when it comes to crossing the floor, the first time is painful, the second time is a breeze.”

Former prime minister Tony Abbott also issued an indirect but obvious warning about the Morrison project to reposition on climate change. Questioned on the initiative, he said: “We were elected in 2013 to do four things: to keep our borders secure, to repeal Labor’s bad taxes, to keep the budget under control, and to end Labor’s emissions obsessions. The one thing you have to do is keep faith with the electorate.”

This week Mr Morrison said he would prefer to reach “net zero” emissions by 2050 but that depended upon technology and ensuring the protection of “jobs and living standards, particularly in regional Australia”.

Mr Littleproud said: “This was the lesson of the 2019 election when the Labor Party promised carbon neutrality at 2050 but couldn’t tell us how they would get there or who would pay for it.”

Mr Morrison has compelling reasons for his repositioning. He needs to respond to changing domestic and global sentiment.

In his first phone discussion with newly installed US President Joe Biden, Mr Morrison said there was “an absolute affirmation” the two nations would work together on the economy, security, COVID, regional issues and on climate change “achieving a zero pathway through technology”.

In his opening foreign policy speech, Mr Biden identified his priorities. “America must lead in the face of this existential threat,” the President said of global warming.

It is a new world; Mr Morrison has no intention of being left behind.