ABC PM: Autistic children home-schooled because of a lack of school places 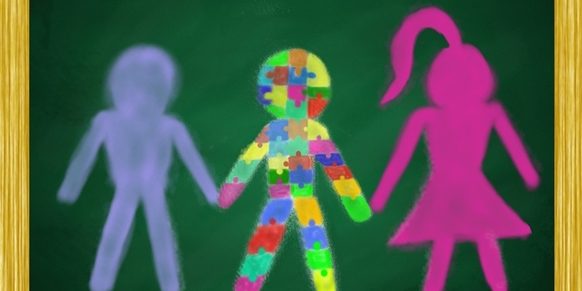 DAVID MARK: Disability advocates say autistic children are being turned away from mainstream schools because they lack specialised support.

As a result, families with autistic children say they're being forced to home-school their kids.

Many parents have told a Senate inquiry that their autistic children are bullied, misunderstood or placed in cages or seclusion areas.

BRIDGET BRENNAN: Sydney mother Cassandra Winter home-schools her son, who has Autism and is currently in grade two.

She says the two schools he was previously attending weren't able to meet his needs.

CASSANDRA WINTER: My son had attended a public school, from there he had been referred through to a school for specific purposes, and unfortunately his anxiety levels just increased to the point that we got to what's termed “school refusal”.

Increasingly, many of the parents in the group are teaching their autistic children at home.

CASSANDRA WINTER: Some parents have had to give up their jobs in order to home-school. There isn't a lot of support when home-schooling. Ultimately, what we would like to see is true inclusion.

BRIDGET BRENNAN: Stephanie Gotlib from Children with Disabilities Australia says home-schooling is often the only option, when autistic children are refused enrolment at schools.

STEPHANIE GOTLIB: Why isn't that student afforded their rights to go to the school? I mean often kids want to go to their local school, but they're too often told, “No we can't meet the needs of your child,” sometimes they're told, “We don't want them.”

BRIDGET BRENNAN: A Senate committee is currently looking at whether there's a lack of support for disabled children in Australian schools.

BRIDGET MCKENZIE: Parents are taking matters into their own hands and saying, well if I cannot find an inclusive space for my child, then they're choosing to educate that child at home.

I think there's a variety of measures that Government can do to address this issue, but one of them is absolutely ensuring that principals and school councils are very, very aware of their responsibilities under the Disability Discrimination Act.

Eight per cent of students at the school are disabled, and all teachers have been trained in special education.

But Mr Ward believes there are sound reasons why a school may refuse to enrol a child with a disability.

MICHAEL WARD: I know the inquiry heard a lot of issues from parents around feeling that schools didn't want their children in their school and that the door was closed and that there were issues around that. And schools do have enrolment management plans and the reason for that is around the concept of natural proportion.

So, there is a limit to how much additional need in one classroom, one teacher can deal with. And so, it is important that schools do try to manage that and control that with their enrolments.

And I understand what parents are doing. They want the best for their kids, they hear stories about schools that are doing well and they want to get their kids into those schools. But really, everyone needs to understand that modern classrooms are very complex places.

BRIDGET BRENNAN: A Canberra principal was sacked after a photo emerged earlier this year of an autistic boy inside a cage.

And the inquiry has heard from many other families whose autistic children have been restrained or placed in so-called “seclusion areas”.

STEPHANIE GOTLIB: When we hear about a child being locked in a cage, that's abhorrent and it shouldn't be happening. Those incidents – they reflect a system in crisis where students with disability aren't getting access to educational programs that enrich and extend them.

And instead we're getting interventions which look at how to contain and control a child.