WEEKEND AUSTRALIAN: Recruiting the ‘backbone’ of the community in rural and regional towns 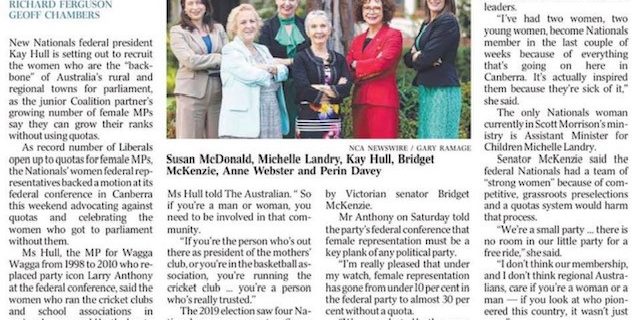 New Nationals federal president Kay Hull is setting out to recruit the women who are the “backbone” of Australia’s rural and ­regional towns for parliament, as the junior Coalition partner’s growing number of female MPs say they can grow their ranks without using quotas.

As record number of Liberals open up to quotas for female MPs, the Nationals’ women federal representatives backed a motion at its federal conference in Canberra this weekend advocating against quotas and celebrating the women who got to parliament without them.

Ms Hull, the MP for Wagga Wagga from 1998 to 2010 who replaced party icon Larry Anthony at the federal conference, said the women who ran the cricket clubs and school associations in ­regional areas would be the key to boosting the number of female MPs.

“Women have long been the backbone of those (regional) communities … but a safe seat is only a safe seat if the voter trusts you,” Ms Hull told The Australian.

“So if you’re a man or woman, you need to be involved in that community.

“If you’re the person who’s out there as president of the mothers’ club, or you’re in the basketball association, you’re running the cricket club … you’re a person who’s really trusted.”

The five-member Senate team is made up of four women led by Victorian senator Bridget ­McKenzie.

Mr Anthony on Saturday told the party’s federal conference that female representation must be a key plank of any political party.

“I’m really pleased that under my watch, female representation has gone from under 10 per cent in the federal party to almost 30 per cent without a quota.

“Woman selected by the grassroots membership are based on merit. We need to do more,” Mr Anthony said.

As rape allegations and sex scandals rock the Coalition, Dr Webster said on Friday that young women in rural ­Australia were looking to join this new batch of female Nationals leaders.

“I’ve had two women, two young women, become Nationals member in the last couple of weeks because of everything that’s going on here in ­Canberra. It’s actually inspired them because they’re sick of it,” she said.

The only Nationals woman currently in Scott Morrison’s ministry is Assistant Minister for Children Michelle Landry.

Senator McKenzie said the federal Nationals had a team of “strong women” because of competitive, grassroots preselections and a quotas system would harm that process.

“We’re a small party … there is no room in our little party for a free ride,” she said.

“I don’t think our membership, and I don’t think regional Australians, care if you’re a woman or a man — if you look at who pioneered this country, it wasn’t just guys.”