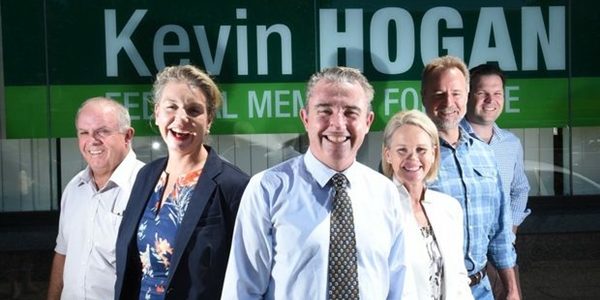 PAGE MP Kevin Hogan has said he is upbeat about the local economy despite a disappointing year for job losses, and offering no assurance on whether he can get funding for the Ballina Marine Rescue Tower and Casino Saleyards upgrade – two lynchpin projects for the region's public safety and economic growth.

The Nationals visit comes hot on the heels of Labor leader Bill Shorten's visit to the region last Saturday, and they came ready to return fire.

Ms Nash labelled the claim by Mr Shorten that the Coalition had taken $50 billion from public health over 10 years “make believe money”.

“What he's talking about is the promises Labor made when they were in government to do with health that were never costed and never funded and were never in the budget,” she said.

Mr Hogan said health spending had increased every year and would continue to do so in the next five years.

“He's saying 'we'd increase it by more' – well show us how and where you'd get it from.”

Commitments include a continuous mobile phone and TV blackspot program which will now roll out indefinitely, moves to introduce more generous support for regional university students, and a pledge to introduce a national effects test to curb aggressively competitive behaviour by the big retailers.

Mr Hogan was upbeat on the local economy, pointing out that beef and macadamia prices were historically high and 4000 direct jobs were coming into the area from the Pacific Highway upgrade.

He had also assembled a group that includes local councils, Regional Development Australia, and the state government to attract businesses to the region.

Ms Nash she had been leading the government's response to dealing with the drug ice, alongside Justice Minister Michael Keenan following the formation of a National Ice Taskforce in March.

“They have comprehensively looked right across the country, they've had consultations with experts, community groups, there's nearly 1300 written submissions to the taskforce; I've done about 11 regional communities across the country.

“The issues are the same everywhere, that this is a significant issue for rural communities; we're seeing an absolute escalation of the drug in our rural and regional communities.

“The crime commission has said that organised crime is specifically targeting regional communities and that's why we're seeing a lot of this increase.

“It's become very clear that law enforcement alone is not going to address this.

“We're going to need to look at demand as well as supply… rehab and treatment services, education; how you make sure that young people particularly never ever take this drug up

“It's going to be a very broad response flagged in the interim report from the taskforce and we should be getting that very quickly.

“There's very much a will to deal with this as quickly as possible, we need a national coordinated response.”

Category: In The NewsWednesday, 30 September 2015