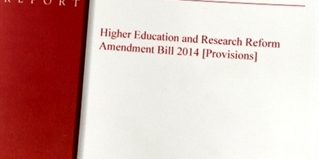 THE Abbott Government has been told by one of its own senators to tweak higher education reforms to make sure a university education was still accessible for as many people as possible.

Nationals senator Bridget McKenzie chairs a parliamentary committee that wants the government to give regional universities more help and change its plans to hike interest rates on student debts.

The existing system provided access to those previously locked out of higher education, she said. “We don't want to stop that increase in access.”

Senator McKenzie said it was up to Education Minister Christopher Pyne to decide the best model.