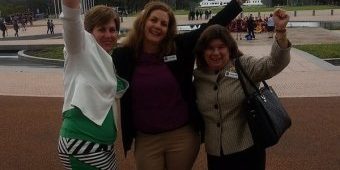 The Federal Parliament has signed off on changes to Youth Allowance that will make it easier for rural and remote students to go to university.

The Family Actual Means Test and Family Asset Test will be removed from the Youth Allowance Personal Test from the beginning of next year.

An income test will still apply, but all dependent children will be taken into consideration in that assessment, which the Government says will "soften reductions in Youth Allowance" as family income increases.

The Isolated Children's Parents Association (ICPA) has been pushing for the change for almost 20 years, arguing that children from asset-rich but cash-poor families were being unfairly prevented from pursuing tertiary education.

Its emotional immediate past president Judy Sinclair-Newton said news that the bill had passed "means a lot" to regional Australian families.

The changes will mean thousands more people qualify for an average annual youth payment of more than $7,000 per year.

The government said more than 1,200 families from regional and remote areas will benefit from the changes.

"We have these assets that don't generate a lot of income," Ms Sinclair-Newton said.

"Families often have two or three children away at boarding school, and then to commit to higher education costs of living away from home, it's huge to families.

"I just can't believe that it's gone through."

Current ICPA president Wendy Hick says the burden of living far from home is a real barrier between regional kids and university.

"This will be a tremendous help to them."

Mrs Hick and her family live on a remote property north of Camooweal on the Queensland/Northern Territory border, where many producers have been struggling with years of drought.

She said making Youth Allowance more accessible will be an enormous relief for drought-hit families.

"I have a son who's in his last year of university this year, and we went through all the forms, all the red tape, in the middle of a drought only for him to receive a letter saying, 'I'm sorry, your family's not eligible, their assets are too [high]'. And that's just purely because of the family farm that we're on," she said.

"However I've got a son who's just graduating Year 12 next week, and to think that the experience might possibly be completely different for him, and hopefully it's going to make his dream of studying at a tertiary level far different."

Social Services Minister Christian Porter said regional children have been "at a particular disadvantage" in applying for Youth Allowance, because their families' mix of assets and income are very different to many other Australians.

"This puts them on a far more level playing field," he said.

"It's something that rural and regional families have been calling out for for a long time."

Victorian National Party Senator Bridget McKenzie, who has been one of the parliament's most vocal advocates for the changes, said she's "rapt" they've now been approved by the Parliament.

"So many rural and regional MPs from all sides of politics know what an issue this is for our communities and our young people, and to have that legislation passed and that 1,200 families from remote and regional areas will be eligible for an increase in payment, [I'm] really, really excited," she said.

"With the impact of globalisation and automation, 70 per cent of those entry level jobs that young people traditionally go to aren't going to exist," she said.

"Now more than ever before, access to higher education is really, really important."

Senator McKenzie said the changes represent "a first step" in addressing equity of access to higher education for country kids.

"The whole Parliament was rapt and everybody has recognised that this has been an unfair issue and a handbrake on young people, particularly from farming families, accessing higher education," she said.

Category: In The NewsThursday, 12 November 2015