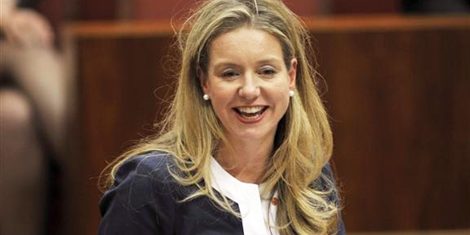 Tonight I rise to make to make some comments on how the government's higher education reform will expand opportunities for regional students. As Sam Seaborn famously said, 'Education is the silver bullet.' It is critical for our economic and social wellbeing as a nation. I am concerned and frustrated that the benefits have been in the shadow of headline-grabbing protests by mainly city based students opposed to the reforms. Far be it from me to critique a good student protest, as my generation was the first of the HECS generation, and many of my fellow students in the late eighties took to the streets en masse. So I would never critique that. I stand here not just as a Nationals senator but also as someone who has taught secondary and university students. I genuinely believe these changes will be good for regional students, universities and the communities they live in. There is a good story to tell about these reforms, because we as a government are committed to sustainable higher education where we balance equity and access—equity between personal and private benefit and access both to excellence internationally with respect to our research and to a wider range of options for students in terms of pathways and support and getting those previously unable to access higher education into the sphere.

I will start with the government's multimillion dollar investment across the higher education sector. We will invest $371.5 million over three years to expand the current system and to provide support to students completing higher education diplomas, advanced diplomas and associate degrees. We will extend Commonwealth support of $448.9 million over three years to private universities and non-university higher education institutions. These initiatives mean that universities, colleges and TAFEs in regional areas, which tend to attract local students from lower socioeconomic backgrounds and relatively poorer high school achievement, can offer more courses. These qualifications will provide career opportunities and pathways to further qualifications. These reforms will also encourage innovative partnerships, especially in regional areas where universities and TAFEs can work together to offer the skills and knowledge that local employers are looking for. Federation University Australia at Ballarat, for example, has partnerships with a range of TAFEs in regional Victoria to provide pathways to higher education for people who might not otherwise get the opportunity and is producing graduates with sought-after skills for the regions.

The reforms will ensure students living in rural and regional Australia will have the same world-class higher education opportunities as students living in metropolitan areas and will allow them to contribute to growing their local economies. Students will be supported irrespective of where they choose to study. First-generation students, those who come to higher education without high ATARs, and mature age students will benefit from additional access to supported pathways. More than 80,000 additional students nationally will benefit from these increased opportunities by 2018, many of them from low socioeconomic backgrounds, as confirmed by my coalition colleague and Minister for Human Services, Senator Marise Payne, in this chamber yesterday. This will potentially result in a significant boost to the number of undergraduate students from low-SES backgrounds under Labor's demand-driven system, which reported an increase of more than 21,818 from 2008 to 2012, according to higher education student statistics.

The Secretary of the Department of Education, Lisa Paul, recently told Senate estimates that an important feature of the package for regions is to increase Commonwealth-supported supply of students. This in turn will help improve course completion rates. The Abbott-Truss government will continue to support regional higher education directly through the regional loading that is provided to universities in recognition of the higher cost of operating regional campuses. We will provide $274 million in regional loading over the next four years.

Fee deregulation, a hot topic at the moment, will see universities able to set their own course fees from 2016 . This will enable regional universities to successfully compete to attract more students, potentially leading to lower fees at some uni versities . W e are also continuing to support 24 structural adjustment and infrastructure projects worth $683 million that ar e benefiting regional and outer metropolitan areas.

The Abbott-Truss g overnment will introduce new Commonwealth s cholarships at Australia n universities to ensure students from disadvantaged backgrounds do n o t miss out. One dollar in every five that universities and other higher education institutions receive in additional revenue raised through student fees will fund these scholarships. The scholarships will provide tailored, individualised support to students from low socioeconomic background s . These Commonwealth s cholarships have the potential to benefit regional students in particular.

Under the Higher Education Loan Program, students do not need to pay a cent up – front for their education. They only have to start repaying their loan when they start earning a decent income, currently $53, 000 per annum. HELP loan fees, which were as high as 25 per cent of the course fee, have been scrapped. This will level the playing field for students. The only other changes to HECS/HELP are that students will now be asked to pay, over time, 50 per cent of the cost of their course instead of the 40 per cent which applies now , and the interest rate will change from the C PI to the 10 – year bond rate. Students will be borrowing at the same rate it cost s the government to borrow money. The Department of Education estimates this will mean an extra $3 to $5 a week in repayments for the average graduate. Given that graduates will earn around a million dollars more over their lifetime than other school leavers, this does not seem like an unreasonable burden.

Supporting young apprentices is a key component of our program. The Abbott-Truss g overnment is delivering on its commitment to introduce t rade s upport l oans for apprentices to encourage more young people to take up a trade and complete their qualification. From 1 July 2014, the government will offer loans of up to $20,000 over the life of an apprenticeship. Like HELP loans for tertiary students, the loans will be repayable once the apprentices are earning a sustainable income. A gain, this will benefit apprentices in rural and regional Australia.

The Abbott-Truss g overnment will invest $11 billion to build on Australia's world-class research capacity . Research priorities include $200 million to accelerate research into dementia , $42 million to expand the Australian Institute of Tropical Health and Medicine at James Cook University in North Queensland for research into tropical diseases , and $24 million to support the Antarctic Gateway Partnership as part of a strategy to enshrine Tasmania's position at the centre of Antarctic research. There will also be $139.5 million for the Future Fellows hips s cheme , where we encourage mid-career young researchers to stay and focus their research on national priorities.

In conclusion, i t is a fact that t he Abbott-Truss g overnment's reforms will benefit regional students and un iversities. Professor Peter Lee, t he c hair of the Regional Universities Network, or RUN , said at the time the reforms were announced in the b udget that the network was pleased that the importance of equity and participation of students in higher education had been recognised in the higher education measures and that RUN was keen to work with the government on the detail of the reforms. That is a key point to make—that the government is now going out and consulting with the sector to ensure that the details of these programs are bedded down in a way that makes very real and sustainable our commitment to equity and access. Professor Lee said:

We are particularly pleased that the government has decided to keep the demand driven system for bachelor places and extended it to sub-bachelor places. This will assist in providing pathways and lift participation in higher education …

He, like the Nationals, notes the significant contribution regional Australia makes to our national prosperity and productivity, with a third of the population living in the regions.

Senior e ducation d epartment officials also confirmed at estimates that the new direction for higher education will help regional students and regional universities in a number of ways. The recent report Review of the demand driven funding system found people living in regional and remote areas are less likely to go to university than their metropolitan peers . The Bradley r eview of higher e ducation found that those from remote and regional areas and from low socioeconomic backgrounds are the ' most seriously underrepresented groups ' participating in higher education over the last decade. Despite low access rates to higher education — around 16 per cent since 2002 — the report says the success rate of low socioeconomic status students is 97 per cent of the pass rates of their medium and high socioeconomic status peers and that this has been very stable over the last five years. We must therefore ensure these students get every opportunity they can , as well as the financial support and the pathways they need to further their education.

F ee deregulation will potentially benefit regional students , with universities now able to price their courses according to market demand in a positive way . Indeed, there may be the opportunity for reverse migration, as low socioeconomic students and those that are more price sensitive see the opportunity of studying at a regional university. Not only will this provide a boost to regional economies by ensuring there are more skilled workers, but the education institutions themselves will be able to grow, employ more people and invest back into their communities.

Why were regional students left behind by the former government? We are getting the balance right. We are increasing participation for those seeking— (Time expired)