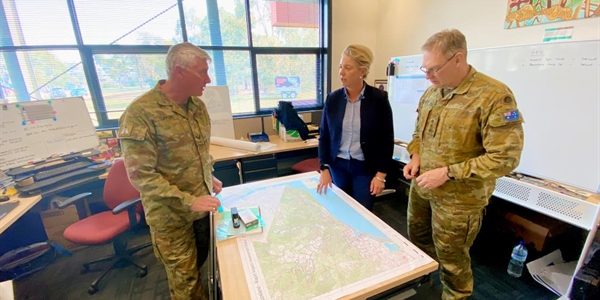 Senator McKENZIE (Victoria—Leader of the Nationals in the Senate) (12:41): Today I rise on behalf of the National Party to acknowledge the awesome contributions Australians have made in defending lives and livelihoods as this horrific bushfire season continues.

Our deepest condolences are to those families who today are without their loved ones as a result of these fires. Thirty-three Australians have tragically died. Others here have spoken of the loss of flora and fauna to our nation. The loss of life in our rural and regional communities hits home hard. They lost their lives putting themselves on the line to protect others. These men characterise the Australian spirit—loyal, hardworking, courageous; men who, as cattlemen and timber workers, appreciated the harsh environment this fire ravaged. They were good men, protecting their local patch. And all of us sympathise with their families.

Over the past month, because these communities are also our communities, National Party MPs and senators have been in these communities, thanking and spending time with volunteers and emergency service personnel, sitting with the families who've lost husbands, sons, daughters, sisters, brothers. In north-east Victoria: Tallangatta, Cudgewa, Corryong, Myrtleford, Walwa. In Adelaide Hills we saw the impact on Woodside, Lenswood and Lobethal. Visiting Batlow, meeting the local IGA owners, Sam and Yin, and learning about that broader impact, I think, that the fire has had tragically had on communities and individuals. In Bega, Bemboka, Cobargo—I think it was probably a very challenging but also uplifting experience to be with the dairy farming family whose father and grandfather had perished. And, instead of being able to grieve, they had to get the cows milked that day. They had to get the fencing done. They were hardworking and generous. And the very heart of the fabric of the Cobargo community are Patrick Salway and his father, Robert.

But the uplifting thing about the experience in Cobargo was what a rural community can do when it is so challenged. And, without state or federal governments, this community came together at the local showground and supported each other through a very, very tough time till real support could actually arrive. That generosity of spirit and commitment of the Cobargo locals to help their neighbours was incredibly inspiring.

I just want, I guess, to share an experience of one of these small communities, called Walwa, in the Upper Murray in my home state of Victoria. After the horror of the bushfire proper, Walwa was cut off from the rest of Australia in every single sense—no landline or mobile communications, no electricity, closed roads, no news. They couldn't receive the ABC emergency broadcast. But theirs is a story of resilience which has played out countless times across Australia over the last couple of months. It's a community built tough and practical, so they used old-fashioned UHF radio and word of mouth. They organised daily community meetings at the Walwa pub for updates, and it was a pub with literally no beer because they had no electricity.

Towong is a rugged part of the Upper Murray and home to so many small communities, like Walwa, that were cut off and which seek to rebuild. Rural farmers are also volunteer country firefighters. Like hundreds and hundreds of farmers and small-business operators across Australia, in recent months they've worked hard at preparing their properties and protecting their homes, their sheep and their cattle. Then they pulled on a uniform and worked with their local volunteer fire crew to protect their neighbours' farms and businesses, often returning to devastation at the home front, just like Walwa CFA captain, David Hanna. It is a one-unit brigade. They worked night and day for days and nights on end to protect their town. One tanker was manned by volunteers. Support crews came and went; the Walwa volunteer crew worked on and on. There were homes and lives to protect. The spirit of Australia, exhausted as it was, was there in that little town. So I salute David Hanna and his crew as examples of the brave men and women who worked so hard and saved so many lives and saved so many livelihoods as a result of their work. We salute our volunteer firefighters and emergency services personnel. We salute the fabulous volunteers across the country for their unwavering commitment to protect their fellow Australians, the Red Cross ladies at the relief centres and the generosity of Australians in the very urgency of that disaster, even today rocking up to do fencing et cetera.

There will be lessons learned so we can be better prepared and better equipped for the next fire, just as we learned and adapted when bushfires took the lives of 173 Victorians in a few hours on a ferocious Saturday afternoon almost 11 years ago. But, unlike that day in February 2009, these fires were not isolated to a region or a district; these fires were felt the length and breadth of eastern Australia, from Queensland to Tasmania and to South Australia. More than 18 million hectares burned. Here, around Canberra today, the country is still burning. Thousands of homes and buildings have been lost; millions of domestic and wild animals have been lost; businesses have been lost; incomes, livelihoods and lives have been lost.

Rebuilding these impacted businesses and communities will take an intentional and coordinated approach. Just like Captain David Hanna and his Walwa crew, Australians are tough and practical. There is a job. Our government stands ready with state governments and local governments to assist those regional communities rebuild. Our thoughts and prayers are with the families of those who've lost loved ones in this tragedy.