Victoria’s farmers, education and other industries to benefit from China FTA 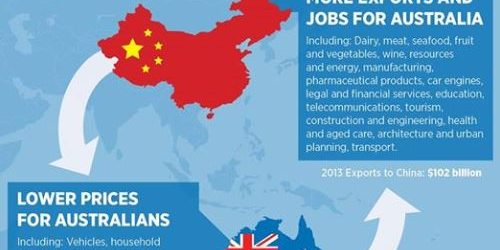 “This is truly a free trade agreement. Australian dairy has been a leading commodity in the negotiations with China; we have campaigned long and hard for a positive outcome and are thrilled to see this come to fruition.”

“The ADIC (Australian Dairy Industry Council) thanked Minister for Trade and Investment, Andrew Robb, the Australian government, industry and the broader dairy community for its ongoing support throughout the negotiations and for working hard to ensure that the China FTA was a commercially meaningful deal for dairy.”

“The dairy industry thanks Senator McKenzie for her unwavering support and advocacy on not just the China FTA but many other issues that affect the industry. She is a true friend of dairy.”

Senator McKenzie said the long-awaited trade deal will give greater access to lucrative Chinese markets, worth around $9 billion to Australia’s farmers and agriculture alone.

“There is opportunity for greater and more profitable trade for our farmers, with China predicted to account for 43 per cent of all growth worldwide in agricultural demand to 2050,” she added.

Senator McKenzie said the ChAFTA agreement provides Australian farmers with an advantage over major agricultural competitors including New Zealand in respect to dairy.

“This is a significant outcome for our dairy farmers who, in fact, will now be at a more competitive advantage to their Tasman cousins. New Zealand’s FTA with China contains restrictive safeguard measures on a wide range of dairy products. The ChAFTA is less restrictive with most dairy products receiving unlimited preferential access to China’s export market, now worth more than $461 million,” she said.

“It will also see tariffs as high as 20 per cent on dairy products eliminated within four to 11 years.

“This is great news for the Victorian dairy industry which supplies around 86 per cent of Australia's dairy product exports and which employs nearly 20,000 people.”

Senator McKenzie said other Victorian industries to benefit include:

“The agreement includes recognition of all private education institutions, in addition to Australian universities which are already listed on the official Ministry of Education website for overseas students. This will provide potential Chinese students with more options of study in Australia and more business for Australian education providers,” she said.

“Education Minister, Christopher Pyne, also signed an Australia-China Memorandum of Understanding on Student, Researcher and Academic Mobility as part of the New Colombo Plan in China from 2015. This will facilitate greater mobility of students, researchers and academics between Australia and China.”

“The Abbott-Truss Government has achieved this trifecta of lucrative trade deals within a year of being in office, as it had committed to do,” she said.

“Securing the trade deal with China after a decade of negotiations is a fabulous achievement to the credit of Trade Minister Andrew Robb and industry leaders including Australian Dairy Farmers.

“The benefits to regional Victoria and regions across the country will be significant.”