The Greens Oppose Farming, Where Does Labor Stand? 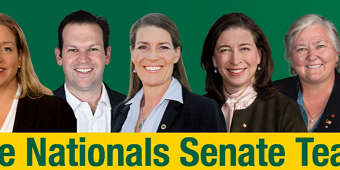 The Nationals Senate team has condemned the Greens for failing to back Australian agriculture and our world-leading live animal export industry.

In opposing a Nationals motion backing Australia’s commitment and support for the $1.7 billion live animal export trade, The Greens thumbed their nose at the thousands of rural and regional Australians who rely on the industry.

At the same time, Labor attempted to take the moral high ground despite its reckless 2011 decision to ban the trade without any consultation, which caused a decade of emotional and financial pain for cattle producers.

“Australia’s livestock export industry is an important contributor to our rural and regional communities, our national economy and it supports thousands of jobs,” Nationals Senate Leader Bridget McKenzie said.

“It’s a legitimate trade, our livestock export system is world class. Let’s be very clear: when Senator Faruqi says ‘the Greens oppose this motion’ the Greens are really saying they oppose farming.

“We know the Greens don’t care about rural and regional families; you have to ask does Labor share the same agenda?”

The Nationals urge the federal Government not to appeal a federal court ruling that found former Labor Minister Joe Ludwig’s decision to ban live cattle exports in 2011 was unreasonable and invalid.

“The National Party strongly supports the live cattle industry because it supports a strong agricultural industry and thousands of jobs, including for Indigenous Australians,” Queensland Senator Matt Canavan said.

“Nationals Senators have welcomed the federal court decision to provide compensation for those hurt by Labor’s reckless decisions. We have called on the government not to appeal this decision so that after nearly a decade of pain some relief can be given.

“We note the government has made no decision on the appeal and the Attorney General will attend the Nationals party room next week to further discussions.”