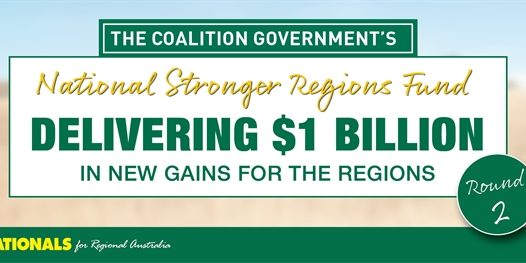 Nationals Leader, Deputy Prime Minister and Minister for Infrastructure and Regional Development Warren Truss and Assistant Minister Michael McCormack announced $293 million for projects that were successful under Round Two of the $1 billion National Stronger Regions program, with 111 projects across Australia selected for funding.

“The Stronger Regions Program is a Nationals initiative, supporting local councils and not-for-profit organisations seeking funding of between $20,000 and $10 million towards infrastructure projects across regional Australia,” Senator McKenzie said.

“I am very excited to announce that nearly five million dollars will be supporting a number of projects across Indi which I advocated for, benefitting local communities.”

“Submissions to Round Two were very competitive with a very high standard of applications,” Senator McKenzie said.

“These projects have been identified as priority infrastructure by local communities. The Fund encourages communities to form partnerships to deliver projects between not-for-profit organisations, local, state governments as well as the private sector.”

“The program’s objectives are to support economic growth, productivity and jobs in our regions by investing in priority infrastructure,” she said.

More information on the National Stronger Regions Fund, including a full list of successful Round Two projects and details on the application process, is available online at www.infrastructure.gov.au/nsrf.