Local fruitgrowers learn how to save on energy costs 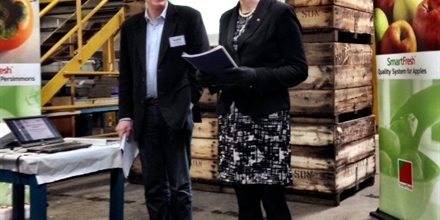 Senator McKenzie addressed fruit growers at the national launch of the Energy Saving Farm Walks last week, which are part of APAL's Watts in Your Business program.

“The Watts in Your Business program audited 30 packing sheds across Australia including the Goulburn Valley, and found ways growers could cut electricity costs by an average of 13 per cent and deliver annual electricity savings of $16,300 a year, with a short payback on investments of less than six years,” she said.

“While welcome, it is important to note Australian growers and farmers already recognise the need for action on the reduction of carbon emissions, and are leading the way in doing so.

“In fact, the former Department of Climate Change stated Australia's primary industries led the nation in reducing greenhouse gas emissions by a massive 40 percent between 1990 and 2006. Our farmers have continued the effort to reduce emissions further.

“In the Goulburn Valley, growers have worked to improve on-farm productivity while ensuring the efficient use of land and water, through the adoption of high density plantings and modern orcharding practices. APAL and growers are to be commended for this good work. The contribution will be significant given the size of the industry.”

“The Goulburn Valley is the major producer of processed and fresh fruit at a national scale and has been for decades,” he said.

“In addition to Senator McKenzie’s comments, Goulburn Valley growers have planted trees at a faster rate due to the increase in density of plantings, and value of production increased by 120 per cent from 2001 to 2011, which is faster than the rest of Victoria or Australia.”

Senator McKenzie and Mr Barr added the repeal of the carbon tax will remove a cost burden on growers.

“Many fruit and vegetable growers require a large amount of electricity and gas to operate their packing sheds and refrigerate their cool stores. Through the repeal of the carbon tax, these businesses will now save on their electricity costs and other costs such as transport, fertiliser and irrigation,” Senator McKenzie said.