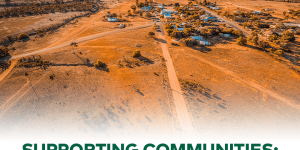 The Prime Minister said the Liberal-National Government’s next step of measures to combat the drought’s impact was ready to flow.

“We are stepping up our drought response once again to meet the increasing needs as the drought’s effects also step up.

“This is money into the pockets of all those farmers and graziers who know they have a future, but are currently struggling to keep their operations running as the crippling effects of this drought continue to bite that we’ve heard from out on the ground. They are backing themselves and we are backing them to make it through to the better days that will be ahead.

“It’s not only farmers doing it tough in drought. Our next step in drought support also has an eye squarely on those communities feeling the strain as work dries up and spending in local stores slows down.

“There is no silver bullet to this drought. Each time we introduce further help we listen, we learn and we adjust our response because we know each community has different needs and priorities that need the resources and cooperation of every level of government.”

“Communities across Australia are suffering the effects of the prolonged dry spell and today’s announcement is the next step in the measures to help ease the burden of the drought.

“This suite of measures go to the heart of what matters to these communities. From small businesses to primary producers, we are working with communities to take the pressure off one of the worst droughts in history.

“Not only is the government continuing to respond as the drought progresses, but we are working on measures to assist in the recovery when the rains come, which includes the government’s billion dollar investment in water infrastructure.

“By redirecting $200 million from the Building Better Regions Fund into drought communities and an extra $138.9 million into our Roads to Recovery initiative, we’re getting local projects and infrastructure work underway to keep finance flowing, trades in work and money rolling through local stores.”

“These loans mean farmers and small business owners can do what they need to, right now at zero cost. Farmers will not have to pay a cent for the next two years and we’ll keep assessing the program if the drought runs longer than that to ensure repayments are affordable.

“With $200 million worth of loans committed already, we estimate the new small business program and the changes to the Drought Loans for farms will see around $1.2 billion issued over the next three years that they can put to their priorities.”

“The package will boost local jobs and respond to individual community needs. We’ve had strong demand on the Drought Communities Extension Program and we’re extending it to six new areas.

“On top of the $1 million we’ve delivered to 122 councils we’ll make another $1 million available for those still in need. We’ve also set up a $50 million fund for council projects in drought-hit communities for things like community hall renovations and playground upgrades.

“This will boost rural economies with more jobs and more business for regional suppliers like the local hardware store.”

Minister Littleproud said the Federal and South Australian Governments had also struck a deal to secure up to 100 gigalitres of water for farmers to grow fodder, silage and pasture at a discounted rate.

“100 gigalitres will produce up to 120,000 tonnes of feed for animals on farms in drought. This will help farmers maintain their breeding stock during the drought so when it breaks farmers can recover faster.”

Minister Littleproud said the government had also released the Drought Response, Resilience and Preparedness Plan. The plan draws on the Drought Co-ordinator Major General Stephen Day’s report and the government’s response, which was also released today. The Plan, Report and the Government’s response are available at http://www.agriculture.gov.au/ag-farm-food/drought/drought-policy.

The government will continue to listen to drought-affected Australia, respond and step up.

Further information on the support available for drought-affected farms and communities and how to access it is available at http://www.agriculture.gov.au/drought/.