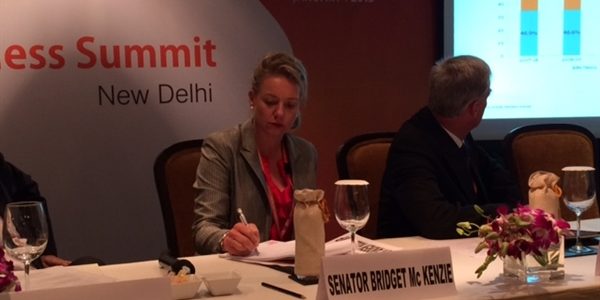 Nationals Senator Bridget McKenzie said there are abundant trade and investment opportunities across many sectors with India.

Senator McKenzie, a member of the joint parliamentary Foreign Affairs, Defence and Trade committee, is part of the 400 plus delegation to Australia Business Week in India, led by Trade Minister Andrew Robb.

“The aim of the business mission is to build on investment and trade opportunities with India which is Australia’s fifth largest export market with a two-way trade worth about $15 billion,” Senator McKenzie said.

“The release of the 2015 Benchmark Report coincided with the mission which states Australia is a global leader in five significant sectors including agribusiness, education, tourism, mining and wealth management – all of which have significant investment potential with India.

“This has been evident in the many meetings and site visits I have participated in relating to education, innovation and research, and agriculture.

“India is Australia's second largest source of international students worth more than a billion dollars to the Australian economy each year. India, on the other hand, was the third most popular destination amongst Australian universities for mobility projects as part of the government’s New Colombo Plan.

“As well, there are 250 research collaborations in place between Australian and Indian institutions including Deakin University from regional Victoria.

“And with a population of over 1.2 billion people, India needs to increase agricultural productivity. Australia has the research, consulting and technology expertise to help India do this. Of particular interest is that while India is the world’s largest producer and consumer of dairy foods, its dairy productivity is among the world’s lowest. I look forward to working with Australia’s dairy industry to help India turn this around. Dairy is an example of natural synergies between our two nations.”

“It is complemented by Prime Minister Modi’s Make In India campaign that includes facilitating investment which Australia is keen to do,” she said.

“Increased trade will create more opportunities and jobs across a broad range of sectors in India and regional Australia. It includes small business, education and training, agribusiness, transport, infrastructure, sport, tourism, and the resource sector which will help meet India’s energy needs.

“Prime Ministers Abbott and Modi have committed to concluding a free trade agreement by the end of the year. This week’s mission gives every confidence that this will happen.

“It follows the government’s success, led by Trade Minister Robb, in securing trade agreements with Korea, China and Japan, in which the latter agreement enters into force today.