Virus-free towns swept up in lockdown 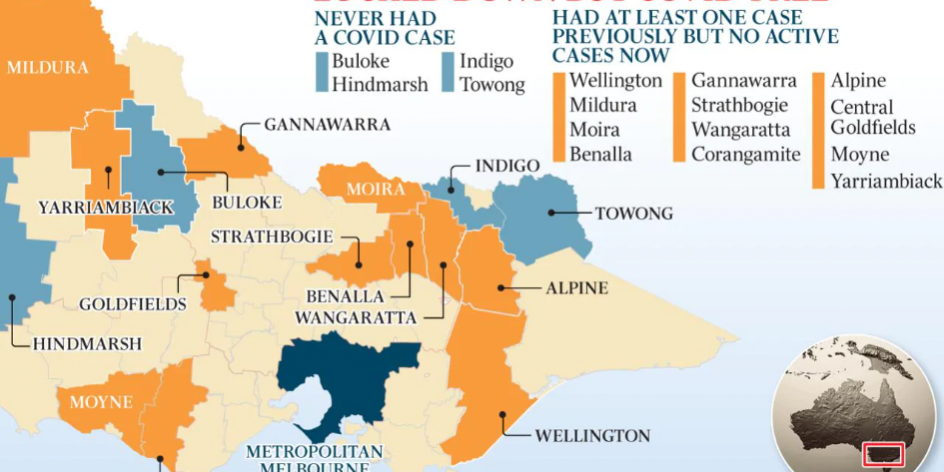 Virus-free towns swept up in lockdown
By Richard Ferguson
The Australian (page 4)
4 Aug 2020
It might only be a three-hour drive from Melbourne, but the town of Rutherglen, population 2109, is a world away from the coronavirus pandemonium.
Indigo, where Rutherglen is located, is one of four Victorian local government areas not to have reported a single COVID-19 case. Not just in the second wave, but all year.
For Wendy Killeen – a winemaker at the 145-year old Rutherglen winery, south of Wodonga – there is concern about the new lockdown measures, and a hope they will keep her town safe.
“We closed our doors on March 27 and reopened June 18 . we’ll have to shut our doors again on Thursday,” Ms Killeen said.
“I do feel a bit scared.
“My daughter and some of my staff live on the other side of the border,” she said. “Getting permits has been pretty difficult for the past few weeks.
“Now we’ve had this lockdown. It’s difficult but I do appreciate why it has to happen.
“We have a lot of visitors, we’re only three hours from Melbourne. Those people could be carriers and that’s a risk nobody wants to take.” But the stricter lockdowns have been met with some unease from National Party MPs, who say Melbourne should have had tougher restrictions earlier to protect the regions.
Nationals MP Damian Drum, whose electorate of Nicholls sprawls north of Melbourne, said Daniel Andrews had not taken the issue of protecting the regions “seriously enough”. “Southern parts of the state now have hundreds of infections,” he said.
Bridget McKenzie, the Nationals’ Senate leader, said people had been allowed to travel on trains through the regions without anyone asking why.
“I think the Victorian Labor governments’s failings on quarantine and contact tracing are clear,” Senator McKenzie said.
Even Deputy Prime Minister Michael McCormack has weighed in, suggesting lockdowns should ease more quickly in regional Victoria. “We understand that outbreaks need to be addressed swiftly, but we also need to mindful of the impacts on communities and businesses which have survived prolonged drought and in some cases recent bushfires,” he said.
Other local government areas, like Queenscliffe on the Bellarine Peninsula, have recorded just one case in months.
Queenscliffe Mayor Ross Ebbels said he was frustrated by the number of Melburnians who left the city during the stage three lockdown, went to his town and ignored social-distancing rules despite his shire having the oldest population in the country.
“Melbourne goes into lockdown and some of those people think ‘let’s hit the holiday homes’,” he said.
Business Wodonga chief Neil Ayrd’s members have been hammered by the border closure with NSW. Now they are headed into a second lockdown, the local commerce chamber said it was “unfortunate” Melbourne did not go into stage four lockdown sooner.
“In hindsight, a harder lockdown earlier should have been essential,” he said. “This second lockdown is devastating for us.”

The Australian: MPs in drive for nuclear energy
Thursday, 18 February 2021