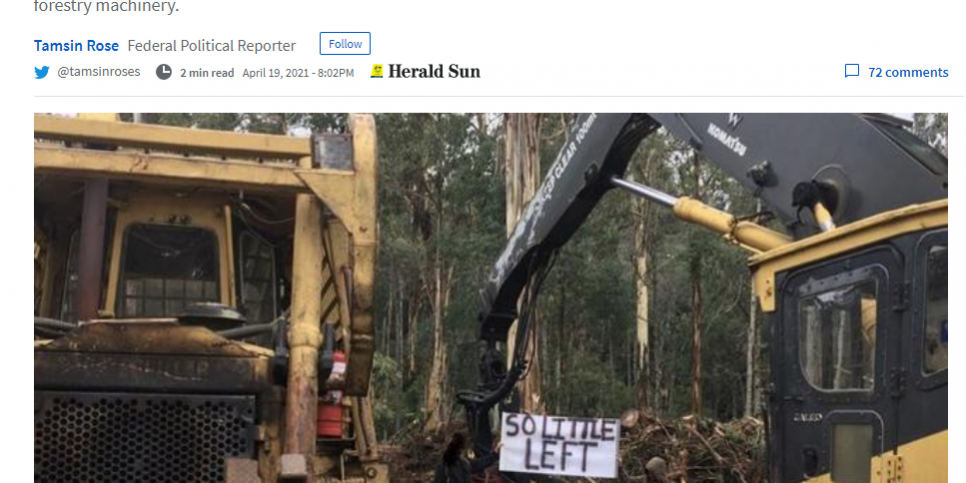 Anti-logging protesters in East Gippsland have been slammed for placing a toddler in danger and using the child as a “political pawn”.

CFMEU national secretary Michael O’Connor said it was not the first time he had seen children used in protests, but it was causing serious distress for forestry workers and putting everyone in danger.

Speaking at a Senate hearing, the head of VicForests, Monique Dawson, also revealed forestry workers were being forced to abandon work every week in areas where protesters were most active.

“It was a very dangerous situation, compounded by there being about a two year old child, who was taken onto the coupe by parents,” Ms Dawson said.

“The idea that you would take your child onto a coupe at any stage but certainly have it near the head of a machine, it was a very concerning situation.”

When asked if it was common to see children at the protests, Ms Dawson said it was a “very concerning development” in the tactics used.

A court ruling last May put state and federal environmental regulations at odds, creating uncertainly for the almost 200,000 Australians employed in the sector.

Mr O’Connor backed the proposed changes and expressed concern at the health and safety situation caused by protesters.

“Our members are quite distraught, particularly when people are using children,” he said. “That is not the first time that someone has brought a young child into a working coupe and I don’t understand how the people organising these protests allowed that to happen. To involve children in it, in a dangerous possible environment is beggars’ belief.”

He said it was causing operators “a heap of mental stress, and stress and strain”.

Senator McKenzie said while protest was “fundamental to our liberal democracy”, the tactics employed by the “anti-forestry and militant extremists” were not OK.

“Australians should be rightfully proud of the high environmental standards our forestry workers operate within,” she said. “They should not have to put up with this sort of abuse and risk-taking behaviour where they work.”

A spokesman for the protesting group — which says it is rallying to protect native forest and animals on Gippsland’s Errinundra Plateau — said all its actions were “peaceful”. “On the day of the action … no work was being carried out by any contractors at the time of the mother and the child entering the coupe,” the Save Errinundra spokesman said.