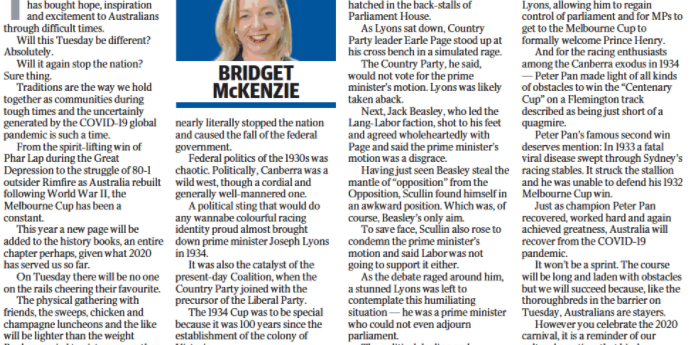 In my soon-to-be-released book on John “Black Jack” McEwen, I recall how the political newcomer found himself in the middle of a political sting on the floor of Parliament which cast doubt over the running of the 1934 Melbourne Cup on the first Tuesday in November. Thanks to the Herald-Sun for publishing this intriguing story.

THE race that stops the nation has bought hope, inspiration and excitement to Australians through difficult times.

Will this Tuesday be different? Absolutely.

Will it again stop the nation? Sure thing.

Traditions are the way we hold together as communities during tough times and the uncertainly generated by the COVID-19 global pandemic is such a time.

From the spirit-lifting win of Phar Lap during the Great Depression to the struggle of 80-1 outsider Rimfire as Australia rebuilt following World War II, the Melbourne Cup has been a constant.

This year a new page will be added to the history books, an entire chapter perhaps, given what 2020 has served us so far.

On Tuesday there will be no one on the rails cheering their favourite.

The physical gathering with friends, the sweeps, chicken and champagne luncheons and the like will be lighter than the weight Banker carried to victory more than 150 years ago.

Still, staff will be busier than a council fly counter in Bart Cummings’ stable as we swoop in on pubs and TABs to put on the once a year bet.

We will still all be glued to our TVs, computers or phones at 3pm when the 2020 field jumps.

New traditions will be born.

Not for nothing is this the race that stops the nation.

In the midst of the Great Depression, the Melbourne Cup nearly literally stopped the nation and caused the fall of the federal government.

Federal politics of the 1930s was chaotic. Politically, Canberra was a wild west, though a cordial and generally well-mannered one.

A political sting that would do any wannabe colourful racing identity proud almost brought down prime minister Joseph Lyons in 1934.

It was also the catalyst of the present-day Coalition, when the Country Party joined with the precursor of the Liberal Party.

The 1934 Cup was to be special because it was 100 years since the establishment of the colony of Victoria.

As part of the celebrations, Prince Henry, the Duke of Gloucester, was sailing from England to attend.

It was expected that all federal ministers and federal Victorian parliamentarians would attend this auspicious occasion.

As agreed with the Opposition led by Labor Party leader James Scullin, Lyons moved what he thought was a routine motion to adjourn parliament for an extra day so members could go to the next week’s Cup, oblivious to a plot hatched in the back-stalls of Parliament House.

As Lyons sat down, Country Party leader Earle Page stood up at his cross bench in a simulated rage.

The Country Party, he said, would not vote for the prime minister’s motion. Lyons was likely taken aback.

Next, Jack Beasley, who led the Lang-Labor faction, shot to his feet and agreed wholeheartedly with Page and said the prime minister’s motion was a disgrace.

Having just seen Beasley steal the mantle of “opposition” from the Opposition, Scullin found himself in an awkward position. Which was, of course, Beasley’s only aim.

To save face, Scullin also rose to condemn the prime minister’s motion and said Labor was not going to support it either.

As the debate raged around him, a stunned Lyons was left to contemplate this humiliating situation — he was a prime minister who could not even adjourn parliament.

The political dealing and manoeuvring was an eye-opener for relatively new Victorian MP John “Black Jack” McEwen, who later wrote: “This was a stunning situation, foreseen only by Page and Beasley. Debate on the motion, as I remember it, went on for a very long time while people thought through the consequences of what was happening … Lyons sent for Page and practically said, ‘Well Doc, what’s your price?’”

The Country Party extracted ministries and the deputy prime ministership from a distressed Lyons, allowing him to regain control of parliament and for MPs to get to the Melbourne Cup to formally welcome Prince Henry.

And for the racing enthusiasts among the Canberra exodus in 1934

— Peter Pan made light of all kinds of obstacles to win the “Centenary Cup” on a Flemington track described as being just short of a quagmire.

Peter Pan’s famous second win deserves mention: In 1933 a fatal viral disease swept through Sydney’s racing stables. It struck the stallion and he was unable to defend his 1932 Melbourne Cup win.

It won’t be a sprint. The course will be long and laden with obstacles but we will succeed because, like the thoroughbreds in the barrier on Tuesday, Australians are stayers.

However you celebrate the 2020 carnival, it is a reminder of our cultural practices that bind us together and make us who we are.

Whether you pick your favourite horse (or political party) by form, breeding, jockeys colours or name, the 2020 running of the race that stops the nation will be one we all remember.

THE AUSTRALIAN: Bridget ­McKenzie in push to move business and families to regions
Tuesday, 24 August 2021
Latest News
Bridget on Facebook